RUN IN AT THE WALL Part 2 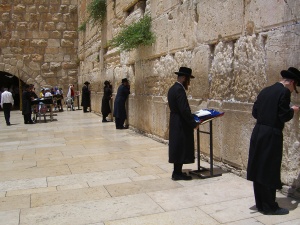 Last week we looked at any issue not particularly published in the United States. A struggle over religious observance at the Western Wall has developed into a political crisis in Israel. Prime Minster Netanyahu has been worried about the stability of his government because of this situation that we have been exploring the controversy.

Christians often have a hard time understanding all the fuss over this particular stone wall that has existed back to the Second Temple period. From Judaism’s point of view, the issue is far more than a commemoration of antiquity. Actually, the issue reflects a basic difference between how Judaism and Christianity function.

Christians center their concerns on what people believe. Having a correct theology is basic for faith. Christian denominations have split many times over small differences in how they define true belief. Having the right convictions is everything.

On the other hand, Jewish interest is in proper observance. Judaism encounters many groups with extremely different views of belief and this diversity is acceptable. What counts is ritually maintaining their link to the past. Keeping the high Holy Days is essential. Therefore, praying at the Western Wall touches the heart of Jewish conviction and faith. It is seen as ritual maintenance that links Jews to the past, to the present, and to the body of Israel.

Adding to the current strife, Jewish women are no longer willing to allow men to dominate ritual prayers at the wall in a manner that excludes them. The WOW group (Women at the Wall) has staged demonstrations wearing kipahs (skull caps), tallits (prayer shawls), and carrying Torahs. This infuriates the ultra-conservative Hassidics who believe they own the wall. Bingo! We have confrontation!

The WOW element are charged with being only Feminist without religious interest. I personally know some of these women (including a female rabbi) and recognize their genuine religious interest. They only want a piece of the wall to pray without harassment from the haredi element.

In the current confrontation put on tentative hold on June 30, Prime Minister Netanyahu appointed a task force to review and study the issues. Any legislation on the issue was asked to be delayed until the task force makes its recommendation. The Prime Minister has been well known for side-stepping controversy with such maneuvers. Moreover, Netanyahu has been a flip-flopper when it served his purposes. Haredi leaders Ya’acov Litzman, Moshe Gafni, and Arye Deri had threatened to topple his government if change was not put on hold.

At this moment any decisions are delayed. However, groups like the Shas political party and other ultra-conservative elements remain committed to stopping any change in the status quo which continues to shut Reformed and Conservative elements out. Is change inevitable? The Reformers say, ‘yes.” The Orthodox says, “never.” What’s ahead? We shall see.

Tagged as wailing wall in Jerusalem, Women at the Wall (WOW)