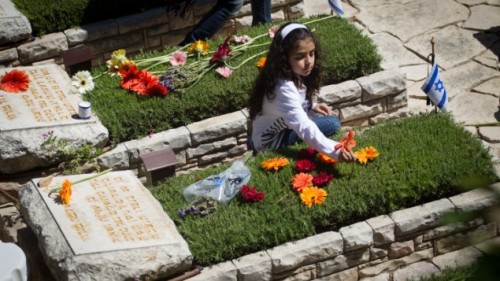 On April 18, a solemn observance fell across Israel. Yom HaZikaron or Israel’s Memorial Day was a pause felt not only in Israel, but around the world where both Jews and Gentiles remembered the Holocaust. With the passing years, the memorial has grown in scope and involvement as more and more people realize what happened in the murder of six million Jews. This gun still points at all of us.

In Poland, the March of the Living brought people of all cultures together with Jewish survivors of the Death Camps to march from Birkenau to Auschwitz on this Memorial Day. Since this observance began in 1988, over 200.000 participants have marched down the same road that some of the victims traveled.

Gathering with both the Jewish and non-Jewish communities in Oklahoma City, I was deeply moved as the Jewish Federation presented the remembrance. Students dressed like Holocaust victims told their stories as if they were ghosts from the Camps while their living relatives of these actual people being represented came forward to light candles in their memory. Some relatives of death camp victims live in Oklahoma City today.

In a sense, that is the point. Hitler intended to eradicate all Jews. But now, there is even a significant population in, of all places, far off Oklahoma City. Life will not be extinguished, but we must stand against and stop all forms of prejudice and genocide. The motto “Never Again” demands everyone work to put an end to bigotry and hate. One of the reasons that Yom HaZikaron is important is because the world must remember what happens when any ethnic group is marginalized and their right to worship in their own way, to enjoy normal experiences, to live, is denied.

The problem continues today. This time it is the transgenders, Muslims, and the Blacks who get caught in the cross-hairs. Homosexuals are no longer the victims they once were. Sure. Some of the groups are nothing like us, but that does not deny them the respect and opportunities their existence grants them.

Israeli Lt. General Gadi Eisenkot, Chief of the General Staff of the IDF, led this year’s March of the Living in Poland. He wrote:

The blood of 6,000,000 victims cries out to us – stand as the guards we didn’t have, assure that Jewish blood will never again be abandoned. We will proudly keep their last will and testament and continue to safeguard the State of Israel allowing it to prosper and flourish. May the memory of our brother and sisters be a blessing.

HEY! HERE’S A NEW ONE FOR YOU!

Surveying the first 3 centuries, we are examining the simplicity,  mystery and awe of the ancient Christian faith.
The focus is practical, relevant, and inspirational TUNE IN