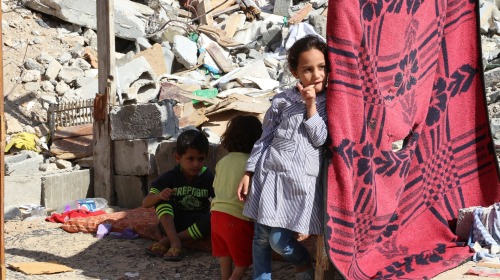 The idea of annexing part of Palestinian land has been pushed off the front page by concerns about the virus and the protests over the death of George Floyd. Not so in Israel! Taking advantage of urging by President Donald Trump, Netanyahu continues to pursue the idea. However, the response in Israel has been tense.

Thousands of Israelis gathered in Tel Aviv Saturday evening to protest Prime Minister Benjamin Netanyahu’s pledge to begin annexing parts of the West Bank next month. Some called his idea a war crime. Police initially sought to block the rally but backtracked Friday after meeting with organizers, who urged participants to wear masks and adhere to social distancing guidelines. Dozens of officers were securing the demonstration after police said attendance would be capped at 2,000, though the Haaretz Daily put the turnout at 6,000 people in what appeared to be the largest protest in the country since the start of the coronavirus pandemic.

Of course, the Palestinians are not happy. Announced at the end of January in Washington, US President Donald Trump’s peace plan provides for the annexation by Israel of 30 percent of the West Bank — covering all the settlements and the Jordan Valley — with conditional provisions for a Palestinian state in the rest of the territory, including some areas on the outskirts of East Jerusalem. The Palestinians have rejected the US plan in its entirety.

Prime Minister Benjamin Netanyahu has vowed to annex the 132 settlements, home to some 450,000 Israelis, next month, and the rest of the territory allocated to Israel soon after, subject to American approval.

Palestinian Authority (PA) Prime Minister Mohammed Shtayyeh said the Palestinians were hoping that Netanyahu would not go ahead with his annexation plan. He called annexation an “existential threat” that would mark the “total erosion of our national aspirations.” The PA’ has submitted a counter plan that calls for the creation of a “sovereign Palestinian state, independent and demilitarized” with “minor modifications of borders where necessary.” The Palestinian text foresaw possible land swaps between the two future states on a like-for-like basis, he said at a press conference. Shtayyeh declined to provide further details about the the 4 1/2-page proposal but said the Palestinian position on major issues is well-known.

What’s next? Sounds like Netanyahu is plowing ahead. Regardless.