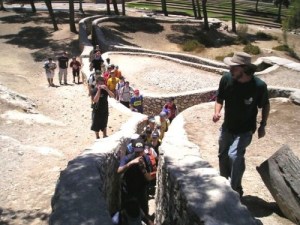 I am often asked about how to take a trip to Israel. Having conducted a multitude of these adventures, my answer usually surprises the inquirer. I suggest two excursions; one for the Christian experience and another for the Jewish discoveries. If you make two such a journey, you will see two entirely different countries—that are both Israel!

Christians visit sights like Capernaum, Bethlehem, where John baptized in the Jordan, the Church of the Holy Sepulcher, etc. Of course, the experience is one of the highlights of a life time. On the other hand, a tour of the Jewish heritage takes one to the Independence Hall in Tel Aviv, the Ayalon Institute, the Diaspora Museum, Mea Shearim, etc.. Once you have taken a tour of both sides of Israel, you’ll be amazed by what you have learned. Unfortunately, both faiths know little about the other.

One of those experiences Christians know little about is the battle of Ammunition Hill now celebrating it 50th anniversary. On June 6, 1967, the Paratroopers Brigade’s 66th Regiment attacked this strategic sight that was the key to conquering the Old City. Well-trained Jordanian troopers held the key position and were firing rapidly. When the Israeli commander and bazooka man were hit, one of the regular soldiers shouted, “Aharai!” (follow me) and troops surged forward.

The battle was ferocious, but the Israeli troops eventually blew up the main Jordanian bunker with hand grenades and took control of the hill. During the fight thirty-six Israelis were killed and seventy-one Jordanians died. Yaki Hetz received Israel’s Medal of Courage for leading the troop forward with his Aharai cry.

When the fight was over, the Israel soldiers did not rejoice, but went about the emotional business of burying seventeen Jordanian soldiers whose bodies were still on Ammunition Hill. They wrote on a tin in English, “Buried here, 17 brave Jordanian soldiers, IDF 1967.

When asked what he learned 50 years after the battle, Yaki Hetz said, “I am very much for peace, but we must first of all be strong. If we’re not strong, our enemies will slaughter us. Our strength is in our spirit. The Jordanians were better soldiers from a professional point of view, and they had better weapons. But we won because of our fighting spirit.”

The few surviving heroes of Ammunition Hill represent significant insight into why Israel has risen from a struggling state to become the most powerful nation in the Middle East. Every Israeli family has its own tragic history that goes back to the Holocaust. They know not to rejoice but to stand their ground. Such a tenacious mentality cannot be obtained through a boot camp. It can only come through one’s history and personal struggle.

Tagged as Capernaum, The Battle

One response to “CLIMBING AMMUNITION HILL”